Koh Tao is renowned for scuba diving thanks to the kaleidoscopic coral reefs & aquatic life encircling the island.
But coral reefs are vanishing fast… 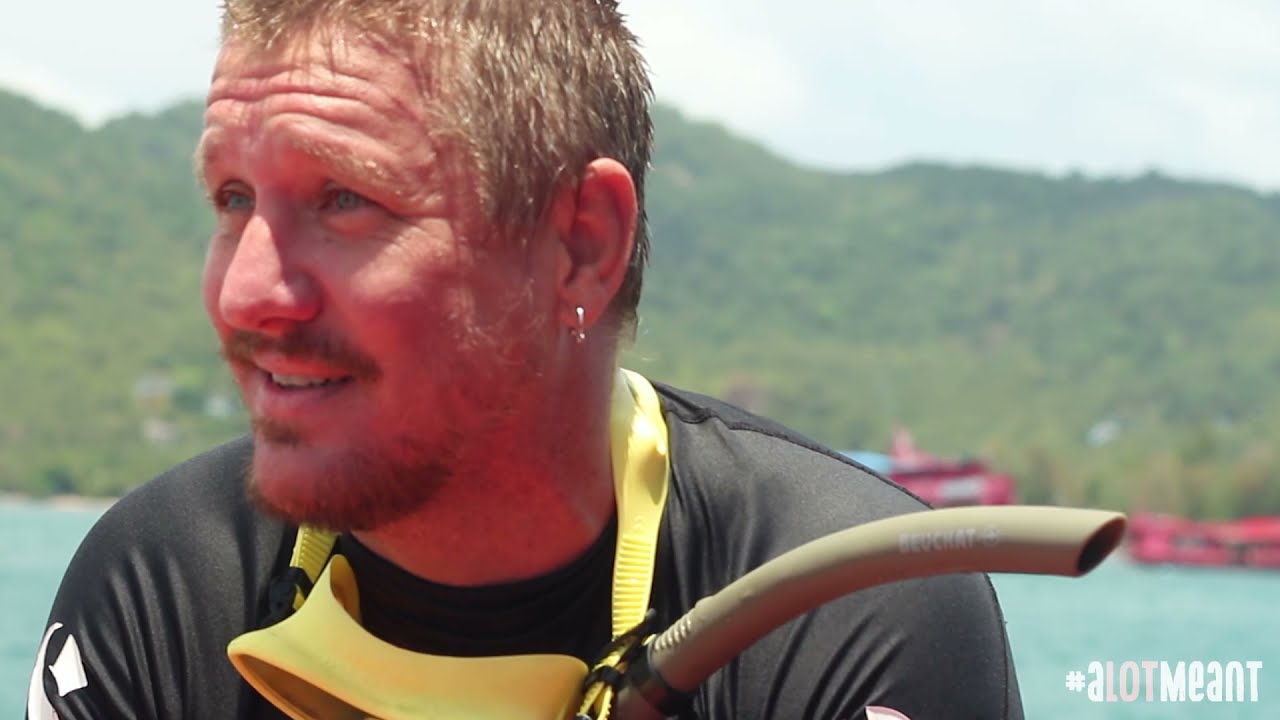 Within our lifetimes, it’s possible that coral reefs could become extinct.

Why are coral reefs dying?

Consider risks facing coral reefs in the Gulf of Thailand:

Volunteer divers survey the seabed and collect damaged coral fragments. (Without intervention, these tiny coral fragments would quickly become silt-covered and then perish).

Collected corals are transplanted onto purpose-built structures which we’ve deployed along the seabed. Coral fragments are attached, photographed & documented, then maintained & measured over time.

Alotmeant’s objective is for transplanted coral fragments to thrive & grow, becoming vast coral colonies that prevail for many generations.

Starting with the first tiny 5-centimeter fragments which were transplanted in 2018, many corals have flourished to span upwards of one meter. Objective-based diving is exciting. Volunteer on the Alotmeant project and contribute to coral restoration efforts.

We run 2 coral conservation programs to get involved: Discuss which environmental conditions are important for coral growth, and the techniques we can use to measure them, including:

The environmental data you collect will be added to the ALotMeant database. This dataset is used to track reef health and help identify seasonal factors which guide our conservation team in choosing favorable dates and locations for future coral planting.

Why are coral reefs important?

Earth’s coral reefs are vital to human beings and the planet’s wider ecosystem for many reasons:

How are humans destroying coral reefs?

The effects of humans, and our contribution to climate change have a significant impact on coral reefs in a variety of ways.

Greenhouse gas emissions and the warming of the oceans is the most obvious impact which results in coral bleaching. To date, 70% of global coral reefs have experienced these destructive bleaching events. Corals thrive in water between 23-31˚C much of the world’s coral currently exists in water right at the upper limit of this temperature range and in shallow water most susceptible to increases. An increase of just one degree can trigger a bleaching event here in the Gulf of Thailand.

Increased levels of CO2 in our atmosphere also dissolve into the ocean lowering the overall pH. This results in what we call ocean acidification which results in corals building weaker structures and becoming more susceptible to damage from storms.

A final significant factor is the results of runoff from human coastal settlement. Dense coastal population settlements often result in hypoxic “dead zones” where there is not enough dissolved oxygen to support life. Species such as clownfish are highly at risk as they require high levels of dissolved O2. If species that exist in the coral reef ecosystem are lost it can become unbalanced and ultimately result in its destruction.

How much coral reef is left?

Over 5,000 species of corals are known worldwide, supporting around 30% of all marine organisms. However, a 2019 paper published by Nature Journal reported that coral reefs cover only 0.5% of the ocean floor.

Coral reefs grow in warm waters, typically 23-30°C, with access to sunlight, away from areas of high sediment and pollution.

Alarmingly, human impact and global warming are causing coral reefs to decline rapidly. In the past 30 years, Earth has lost approximately 50% of all coral coverage. Scientists predict that up to 90% of all corals will die by 2050.

Drilling down to specific observations, as of 2022, the IUCN (International Union for Conservation of Nature) Red List of Threatened Species reports that 33% of all coral species face extinction. In a further illustration, Science Journal reported that between 1977 and 2001, coral coverage in the Caribbean sea is estimated to have dropped from 50% to just 10%.

Today, Thailand is home to more than 4,000 species of fish and 700 categorized types of coral. The trend in Thailand is identical – coral reefs are disappearing fast.

Can coral be restored?

Following millennia of evolution, corals can recover from storm damage, bleaching periods, and other destructive events. Individual fragments or damaged colonies can recover through reproduction – both sexually and asexually – multiplying to form healthy coral reefs.

As scuba divers, we can contribute to coral restoration projects to help rekindle nature’s balance.

Scuba divers can further assist by surveying coral reefs and sharing data with collaborations such as Coral Watch. What does coral restoration do?

Coral reef damage can occur due to both natural and human influences.

In most cases, passive restoration should come first. Removing or minimizing whatever is causing the initial coral damage. For example, this could be establishing a Marine Protected Area (MPA) to prevent fishing on an area of damaged coral reef.

Approaches to active coral restoration can include fragmenting a mature coral colony, then growing the resulting fragments in a coral nursery under ideal conditions. Once fragmented corals have grown to become adequately large and robust, they can be transplanted back into the reef. This fragmentation method offers several advantages in growth-rate and resilience of the restored reef.

Another method of active coral restoration uses divers to scour the seabed, searching for corals of opportunity. Fringing coral reefs can be battered by wave action or storms, causing coral fragments to be separated and fall to the ocean floor. Divers can save these tiny coral fragments, transplanting them back into a favorable environment on the reef to recover, grow and reproduce. How do you restore a damaged coral reef?

The first step in restoring a reef is setting up Marine Protected Areas (MPAs). Reefs are home to 1 in 3 known fish species. Eliminating fishing in these fragile ecosystems helps maintain balance and the future health of the reef.

While there are different approaches to restoring a reef, in the example of our ALotMeant project we use the technique of foraging for and rehabilitating fragments of opportunity:

Corals are naturally adapted to reproduce through fragmentation to survive and regrow after destructive storms. However, this is an adaptation with a low survival rate as many fragments do not end up in a conducive location for growth. Many fragments end up buried in the sand, in a location without enough sunlight, or end up overrun by competing algae.

By foraging for coral fragments and then attaching them to underwater structures we ensure fragments have a better opportunity to recover with access to optimal conditions for healthy growth and begin creating new reefs. We monitor a range of environmental factors to ensure our structure placement is optimized and to pinpoint times of the year best suited to planting. (Enroll in our ALotMeant Level 2 Coral Survey program to join our team in collecting this data!).

Can coral be transplanted?

Coral can be transplanted, and provides a crucial technique in active coral restoration.

By transplanting corals into optimal conditions, we give fragments a higher success rate of growth & reproduction.

Candidate corals for transplanting, methods of attachment, and target substrates vary depending on the project.

Good candidates to be transplanted can include:

Coral fragments can be transplanted onto natural or manmade substrates. It is possible to transplant a coral into an existing reef by attaching it to a suitable rock or boulder. Alternatively, purpose-built structures can be deployed on the seabed. Manmade options include steel frames or concrete blocks.

Techniques to attach a coral fragment depend on the type of coral and target substrate. For example, branching corals species such as Acropora are easily attached to steel frames using a zip tie. Sub-massive coral fragments such as Porites can be attached to a concrete block using epoxy resin. What is passive coral restoration?

Passive coral restoration is a strategy to rehabilitate coral reefs by managing external issues which cause damage to coral reefs.

Approaches to passive coral restoration are wide-ranging and include:

How long does it take to restore a damaged coral reef?

The amount of time needed to restore a damaged coral reef can range from several months to decades; Project timeframe depends on many factors:

Extent & Cause of Coral Reef Damage

The first step in any coral restoration plan should be to eliminate or reduce any cause(s) of reef damage.

For some instances, sources of damage have already been eliminated before a restoration project is launched (for example, responding to a ship grounding or tropical storm). In such cases, active coral restoration can proceed immediately.

More complex scenarios could require initiatives to educate local communities or the implementation of laws to govern land use or fishing industries. It may also be necessary to establish MPAs. Work could take months or years to complete.

If coral fragments to be transplanted are readily available, restoration work can proceed quickly.

Using dive teams to search for ‘coral fragments of opportunity’, if fragments are scarce, it will take longer for divers to locate suitable specimens. In some situations, there may be insufficient quantities of coral fragments available. Ultimately, this will cause a halt to restoration efforts.

How long does it take for teams of divers to transplant coral fragments onto a reef? Underwater work depends on several factors:

After coral fragments have been transplanted into a reef, subsequent growth and reproduction rates are dependent on the coral species.

The amount of time required to restore an area of coral reef is dependent on the unique circumstances of that project.

A ship grounding on a fringing reef resulting in damage to branching corals. Clean water, calm sea conditions, shallow depth with good visibility, and an abundance of coral fragments of opportunity. In this scenario, the coral reef could be on its way to recovery in as little as six months.

Imagine an overfished and heavily polluted reef. The reef is already in bad shape suffering rampant algae blooms and invasions of predator species. Lack of governance of local land use, fishing industries, or wastewater management further accelerates the rate of decline. High sediment, and large amounts of pollutants provide further complications. The declining reef took thousands of years to form and is biodiverse, comprising branching, massive and encrusting corals. This situation is a lot more complex and may require many years to reverse. Coral restoration efforts may even fail. How much does does it cost to restore coral?

The financial cost of restoring a coral reef depends on the methods used and scope of restoration work. Considerations include:

Coral restoration projects which tackle a combination of complex issues will likely be more expensive to undertake than straightforward restoration assignments.

Breaking down the project into key activities:

For the AlotMeant reef restoration project in Koh Tao, Thailand, we estimate the cost of restoring the coral reef to be approximately 700THB ($21USD) per coral fragment.